In the article Slovenian dialectal material which can become part of the VerbaAlpina project is presented. Slovenian is the only Slavic language in Alpine region. It is one of the south Slavic languages (»/…/ At an early stage, South Slavic split into West and East South Slavic; Slovenian and Central South Slavic developed from West South Slavic, and Macedonian and Bulgarian developed from East South Slavic /…/« (Šekli 2013, 71) and it is spoken in the area, where Germanic, Romance, Slavic and non-Indo-European Hungarian languages have been in contact for centuries. Although in their history Slovenian speaking people in this territory have lived in different countries and under different governments that have used different official languages (Latin, German, Italian, Hungarian, Serbian etc.), Slovenian language has a long written tradition. The first Slovenian manuscripts – the Freising manuscripts (Freisinger Denkmäler/Monumenta Frisingensia/Brižinski spomeniki) were created between 972 and 1039, and the Slovenian standard language was consolidated by Primož Trubar already in 1550. Slovenian language exceeds the borders of Slovenia as it is used by Slovenians as an autochthonous minority language in all neighbouring countries, i.e. in Italy, Austria, Hungary and Croatia. Slovenian spoken language can be divided into seven dialectal groups (Gorenjsko/Upper Carniolan, Dolenjsko/Lower Carniolan, Štajersko/Styrian, Panonsko/Panonian, Koroško/Carinthian, Primorsko/Littoral and Rovtarsko/Rovte dialectal groups) and almost fifty dialects and subdialects. 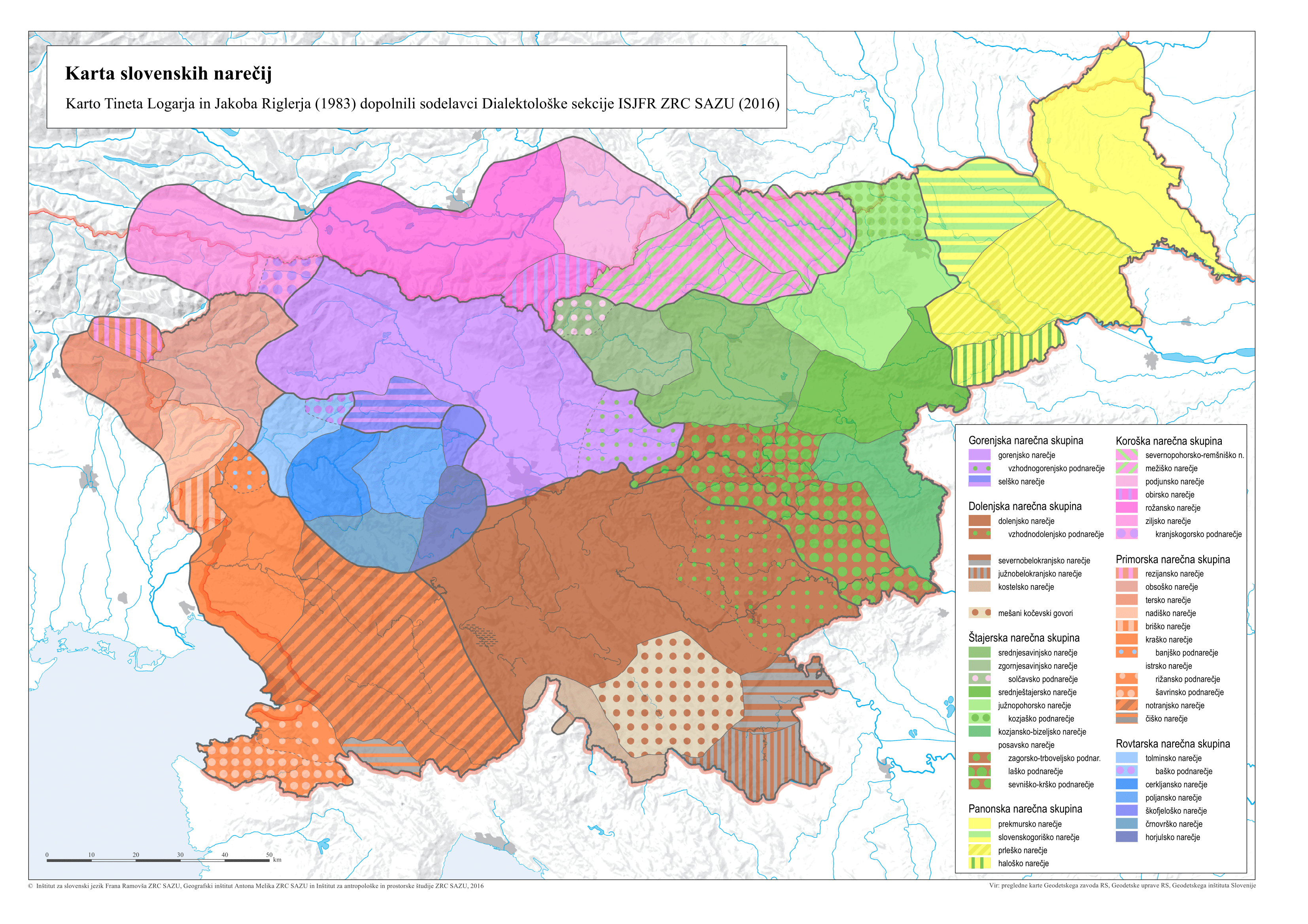 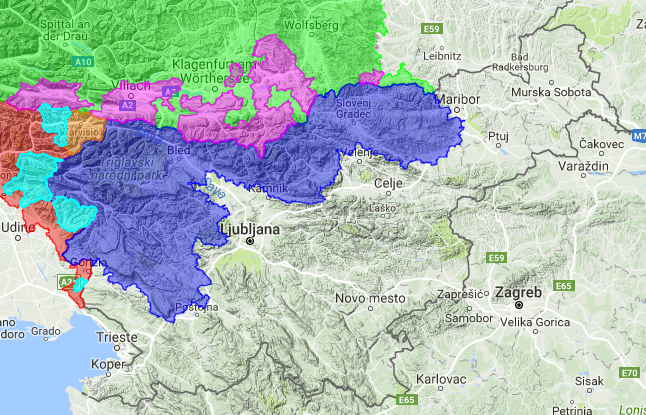 As a sub-field of dialectology, geolinguistics is interested in the spatial distribution of specific language phenomena of one or more languages which is then displayed on a linguistic map. For geolinguistics the geographical presentation of the selected dialect material presents not only the result of linguistic interpretation but also the starting point for further exploration of the language(s).
The Slovenian Linguistic Atlas (SLA) was established by the linguist Fran Ramovš in 1934, but proper preparation for the Atlas started after the Second World War at the Fran Ramovš Institute of the Slovenian Language (ISJFR). Both, the net-points and the questionnaire were rearranged on several occasions during this period. The current SLA network has been expanded to include 417 local speeches, and the SLA questionnaire contains 870 numbered questions (3065 including all the sub-questions). The questions are divided into 15 semantic fields: 1) Human body, 2) Clothing, 3) House, 4) Village, 5) Holidays, 6) Tools, 7) Livestock, 8) Plants, 9) Mountains, 10) Illnesses, 11) Time, 12) Landscape, 13) Family, 14) Counting and numbers, 15) Miscellaneous. These are followed by grammatical questions (from question No. 700 onwards), mainly covering the phonetics and morphology. The collection of dialect material which is stored in the Dialectology Section of the Fran Ramovš Institute of the Slovenian Language in Ljubljana, currently comprises around 720 records of local speeches, i.e. 884,000 index cards and about 400 notebooks – all the archived material has been scanned and is thus reachable in electronic form. It has also been gradually entered into the SlovarRed database, which together with the Geographic Information System (GIS) enables not only the detailed input of dialect data and its analysis at different linguistic levels, but also various cartographic methods and various modes of displaying linguistic data on the map. This database also includes the record’s age, the structure of informants and scans of archived material. The current group of Ljubljana dialectologists has managed to publish this basic project of the Slovenian linguistics after nearly 80 years since the idea of the atlas arose and after 65 years of collecting the dialect material with the SLA questionnaire. The first volume of SLA (SLA 1.1 – Atlas and SLA 1.2 – Commentaries), 2011, contains vocabulary of the semantic field of ‘man/human being’ (body, diseases, family) and the second volume of SLA (SLA 2.1 – Atlas and SLA 2.2 – Commentaries), 2016, contains vocabulary of the semantic field of ‘farm’. Until now, a total of 239 standard Slovenian equivalents (SLA questions) have been geolinguistically represented by 4,535 different dialectal lexemes (SLA 1 – 2,216, SLA 2 – 2,319), which are displayed on 229 commented linguistic maps (SLA 1 – 143, SLA 2 – 86), accompanied by commentaries and indexes of dialect material written in Slovenian scientific phonetic transcription. In their introduction chapters both volumes present the history of the project and the methodology of linguistic analysis as well as commenting and mapping of dialectal material; maps of recorders, time of recording and a type of accentuation are important to understand the data in the linguistic maps properly.

SLA comprises two types of maps: 1. (lexical) maps that present words with/for a certain meaning (How do you call this?) and 2. (semantic) maps that present different meanings of a certain word (What is the meaning of this word?/What do you mean by this word?) Most of the maps are of the first type, for example the map for »a farm«: 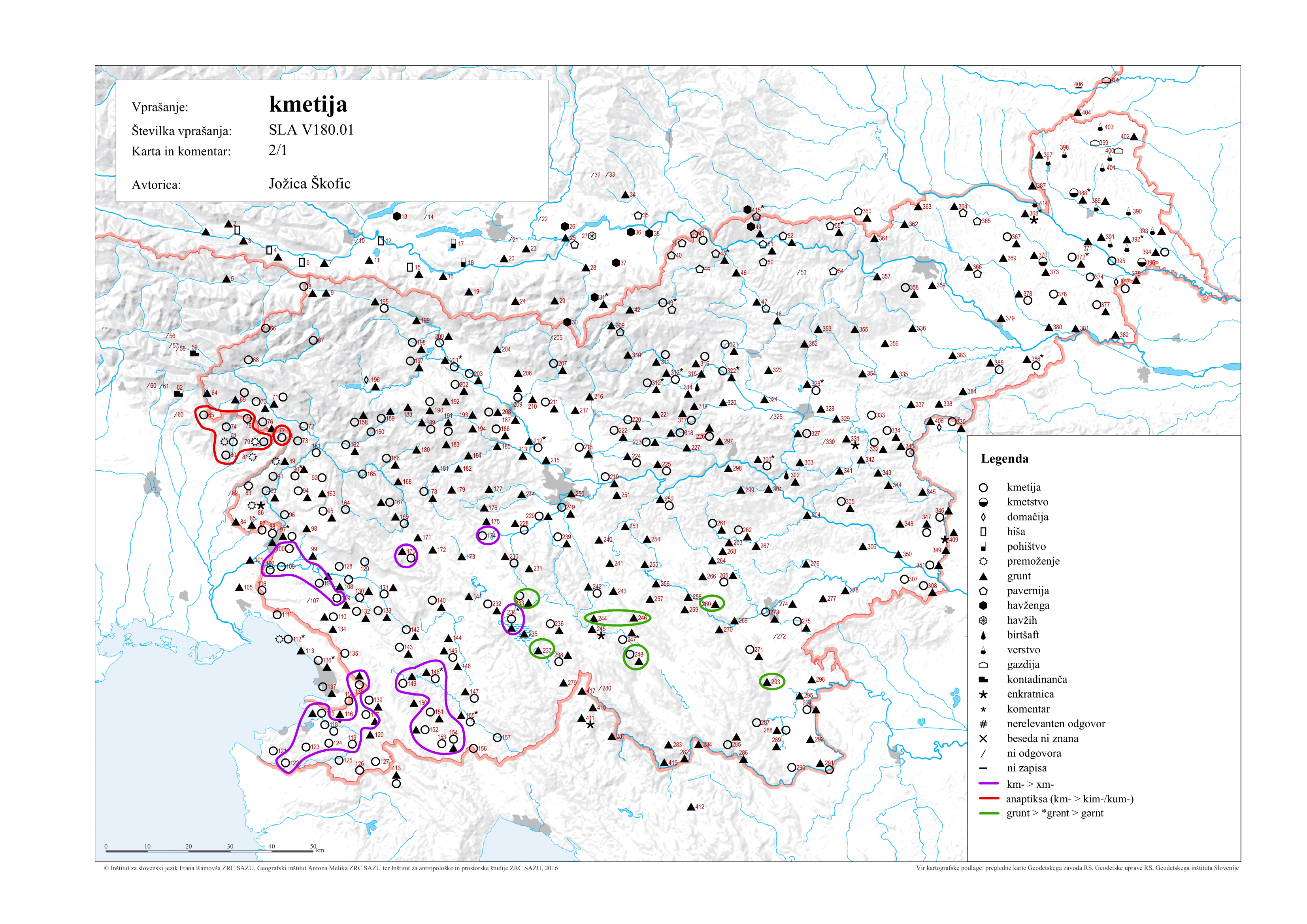 Despite various deficiencies, e.g. problems related to the changes made to phonetic transcription as a result of many decades of data-collection, the material in the SLA indexes is written exactly as stored in the archive. With inconsistent recording of vowel quality and quantity, diphthong variants and phonetic consonant variants, the greatest problem is presented by the recording of accentuation. However, dialectal words, given in the legend of the map, are written orthographically and they are based on morphological analysis, which is the main part of the commentary, for example (comp. SLA 2.2, p. 63–64 and http://www.fran.si/Search/File2?dictionaryId=203&name=SLA_V180.01.pdf):

Preparing material for VerbaAlpina
Maps for SLA are prepared by using the data in SlovarRed data-base, which has many sub-bases and is connected with GIS as well as with digitized archive:

However, it is not possible to use SlovarRed directly for VerbaAlpina project, as this data-base is reachable only for co-workers at the SLA project. It is also necessary to re-transcribe the answers from Slovenian phonetic transcription into Slovenian orthographic transcription; the next step would be re-transcribing into IPA, for example:

SLA has been published also as e-publication, i.e. as html on www.fran.si (dictionary portal of the Fran Ramovš Institute of the Slovenian Language) and as pdf on http://sla.zrc-sazu.si/#v. With a few additions to the software and content, linked with GIS, the database prepared for SLA also makes possible an interactive spatial presentation of the linguistic material – with access to digitized archived material, audio and video recordings, and other online links to information about local dialect studies and places (net-points), to online dictionaries and dialectal corpuses etc. The use of information and linguistic technologies can thus help disseminate the research findings and promote the use of linguistic material in both schools and the general public, while offering assistance to researchers, as well. Interactive publication of SLA (e-SLA) has many advantages, for example, one can choose the language (English, German, Italian, Friulian, Hungarian, Croatian, Russian or French), from which he/she wants to find certain Slovenian dialectal lexemes:

Interactive maps for SLA, which are now being prepared in Dialectological section of the ISJFR (only one map has been prepared as a test version so far), enable online connections with:

By clicking on any net-points (black dots) one can get links to data about the village in Wikipedia or bibliography (Slov. Bibliografija) about a certain local dialect: 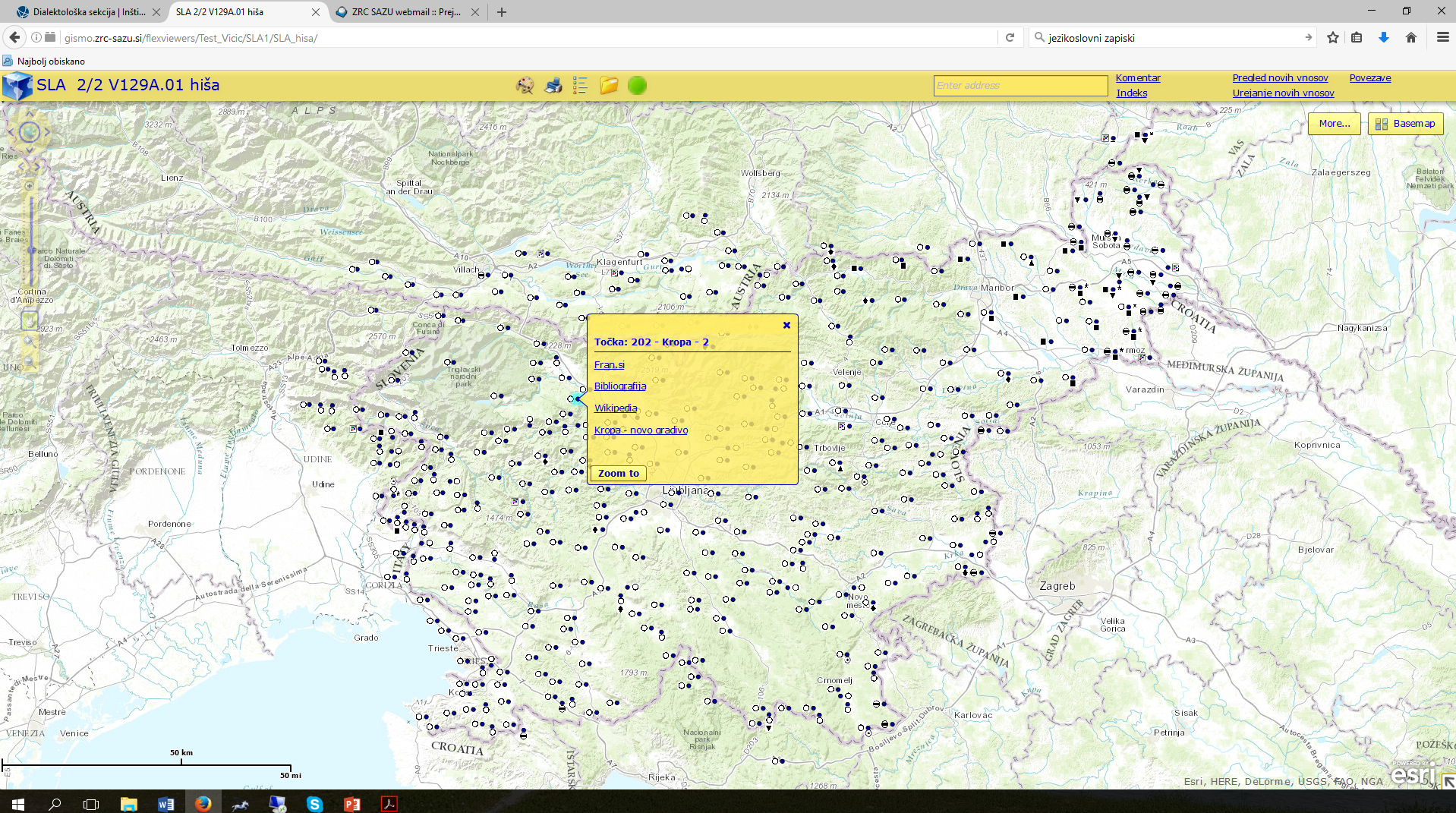 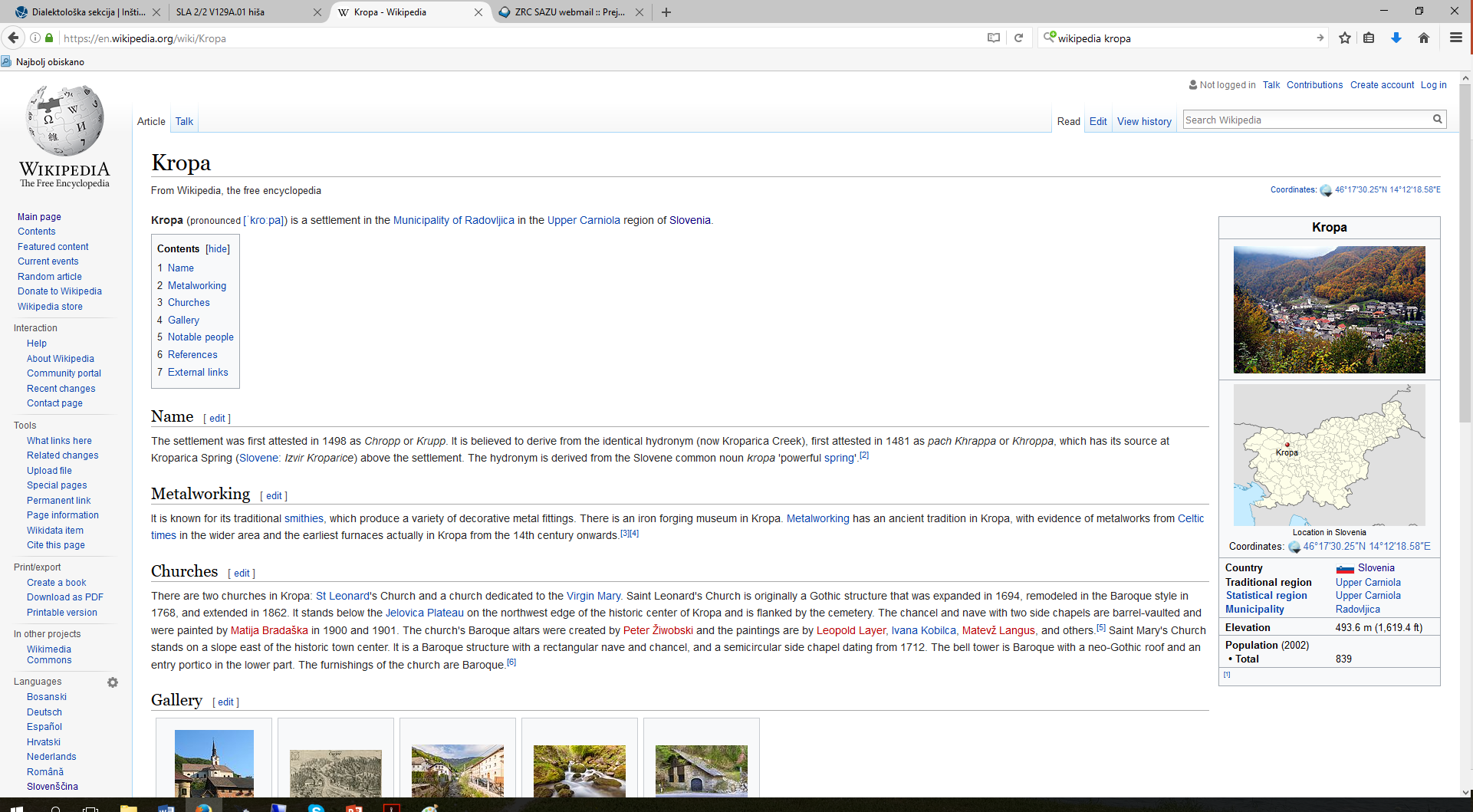 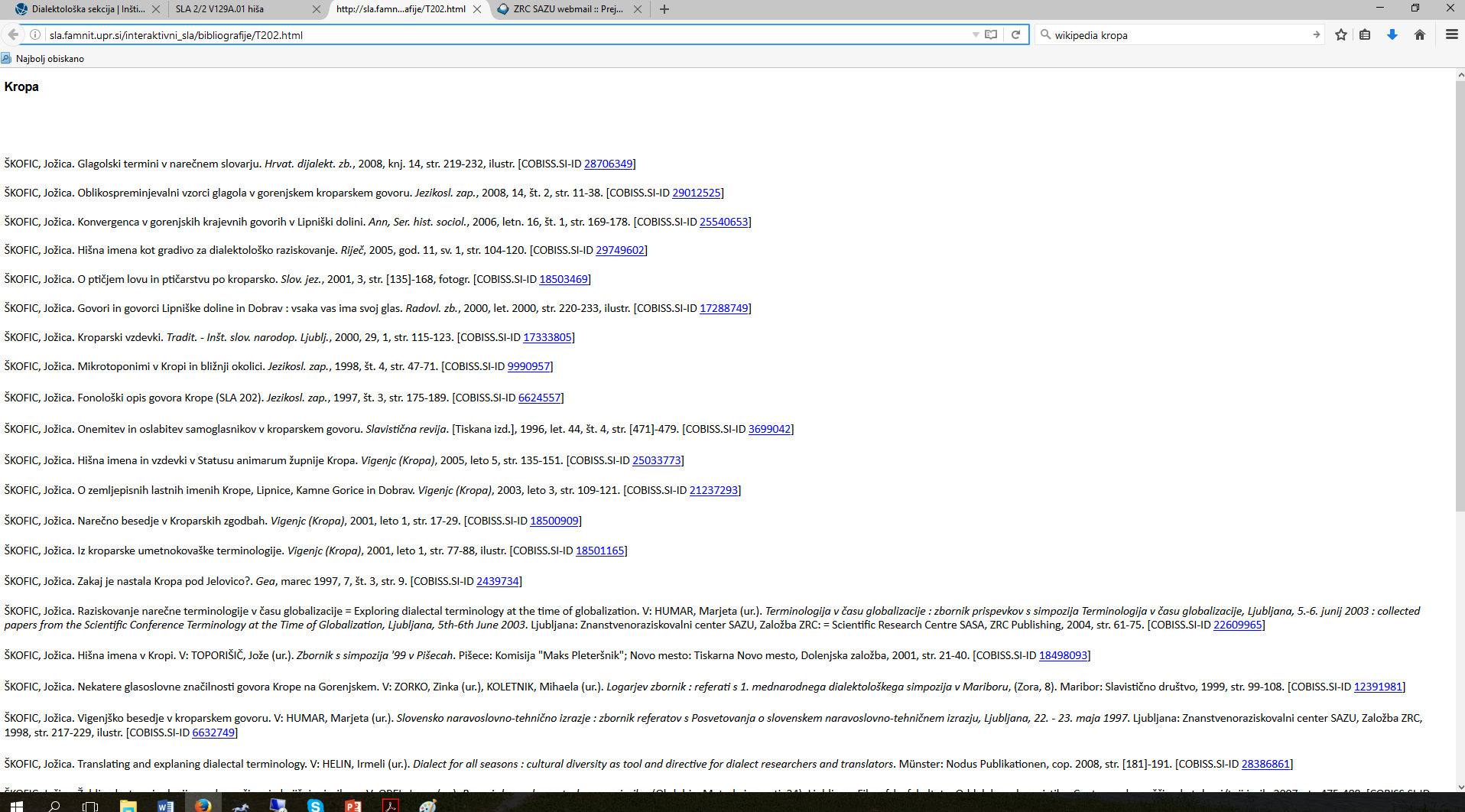 From bibliography about the local dialect of Kropa (SLA T202), prepared by researchers at SLA (http://sla.famnit.upr.si/interaktivni_sla/bibliografije/T202.html) 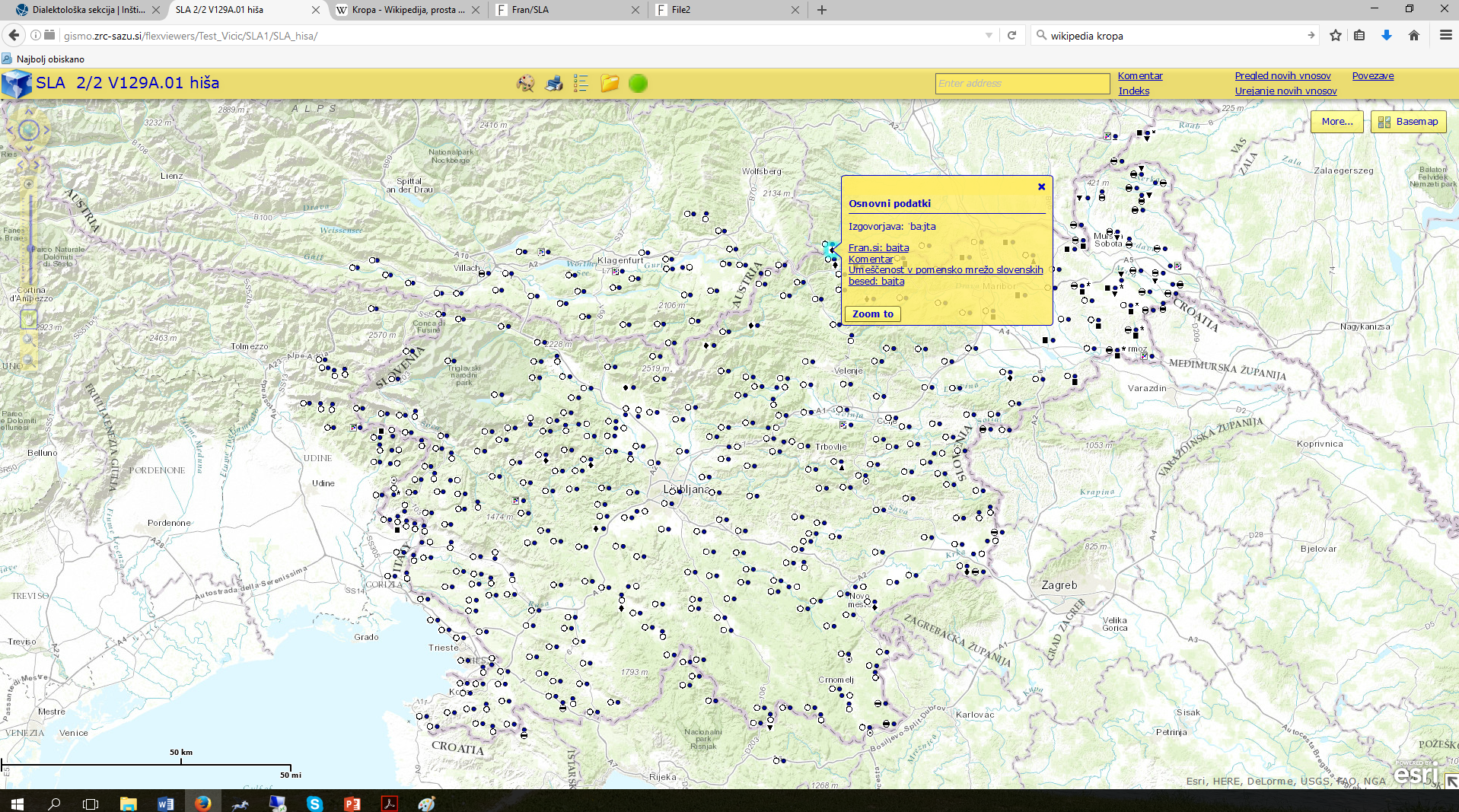 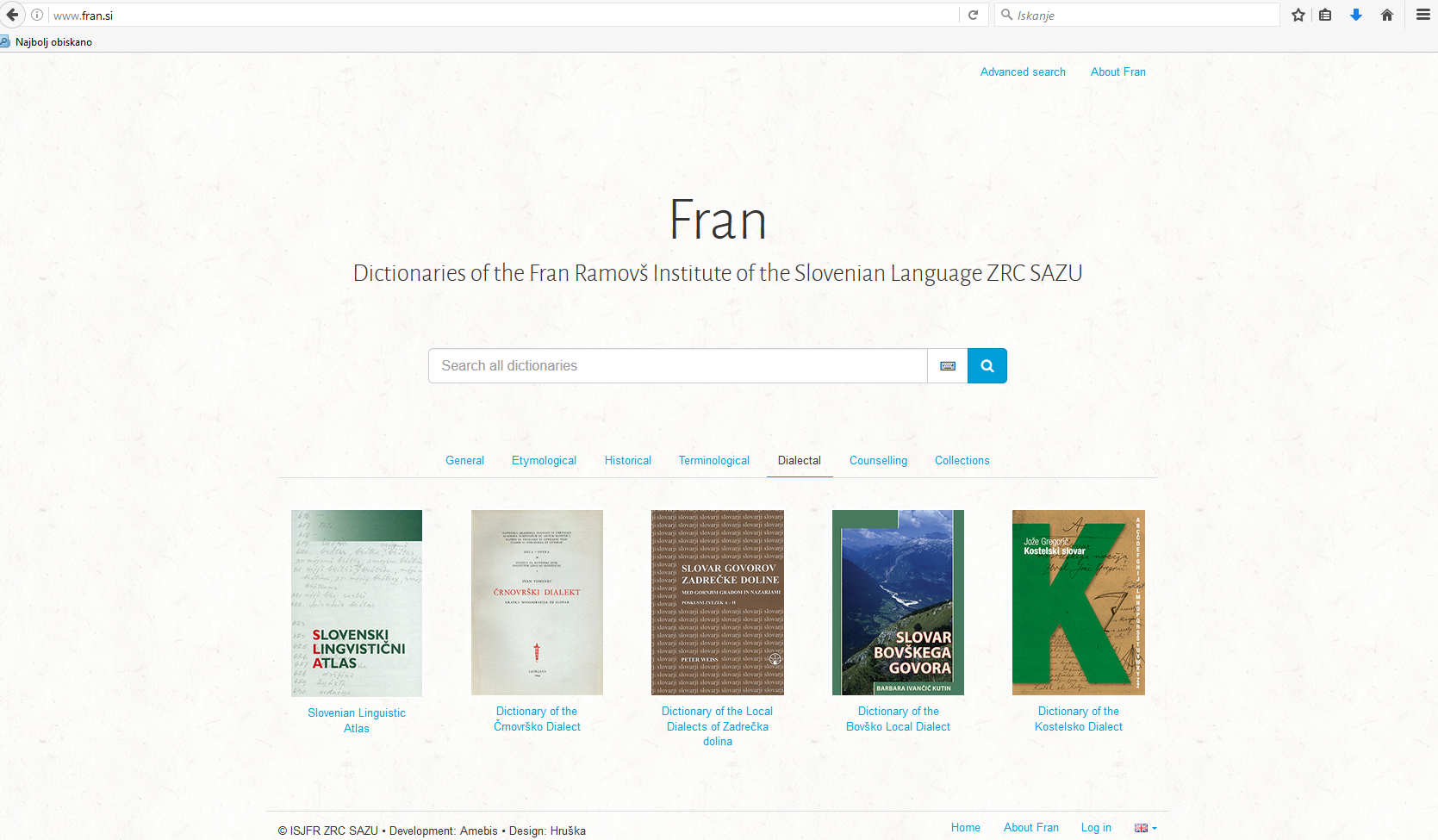 Dialectal dictionaries and SLA on www.fran.si

By clicking on tab Povezave (Hyperlinks) e-SLA is linked with some other interesting internet sites: 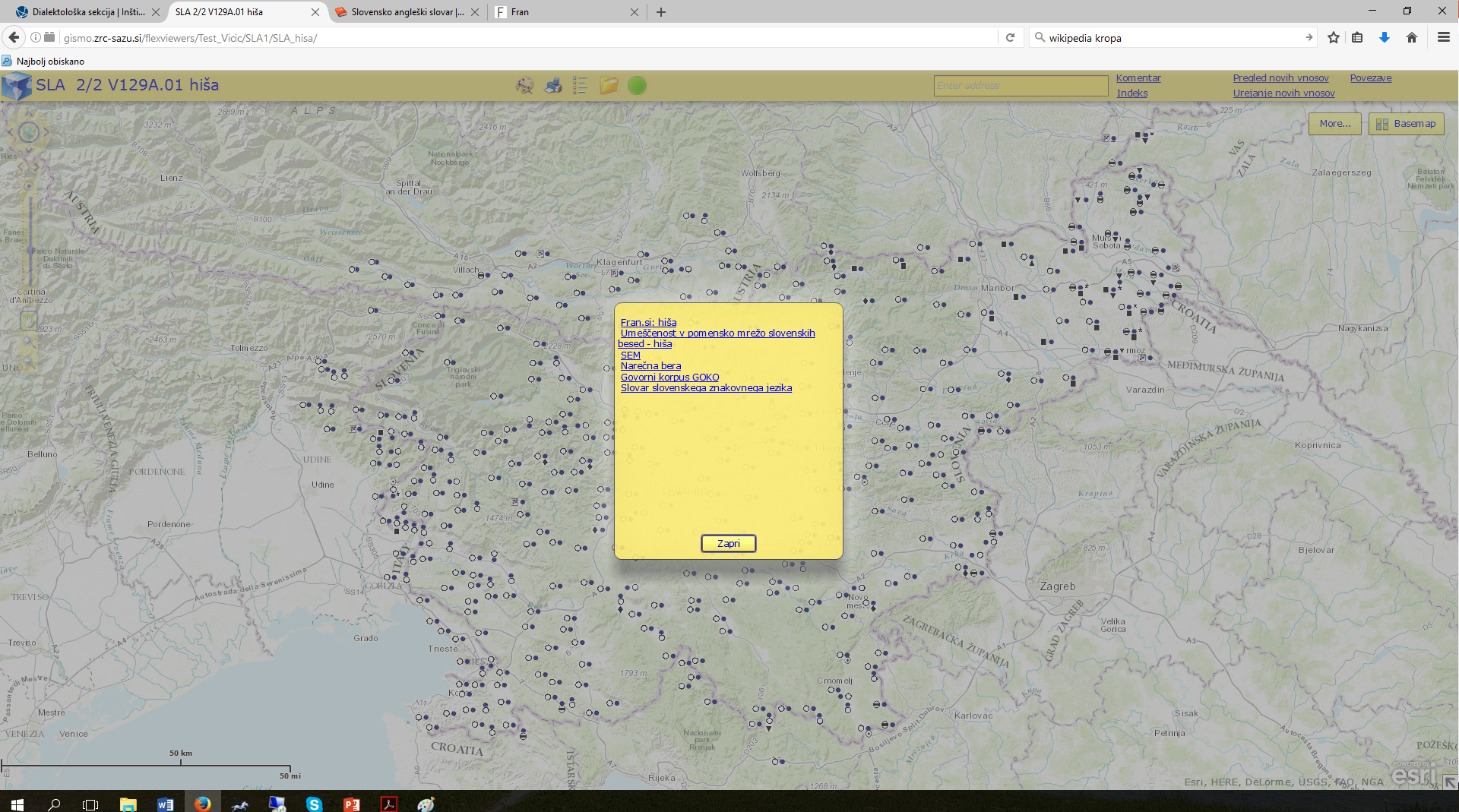 – as some volumes of SLA are interesting also for other human sciences like ethnology, one can reach digitized archive of Slovene Ethnographic Museum (SEM) and thus get more information (pictures, photographies, descriptions …) about the certain concept, object etc. (comp. http://www.etno-muzej.si/sl/search/google/bajta): 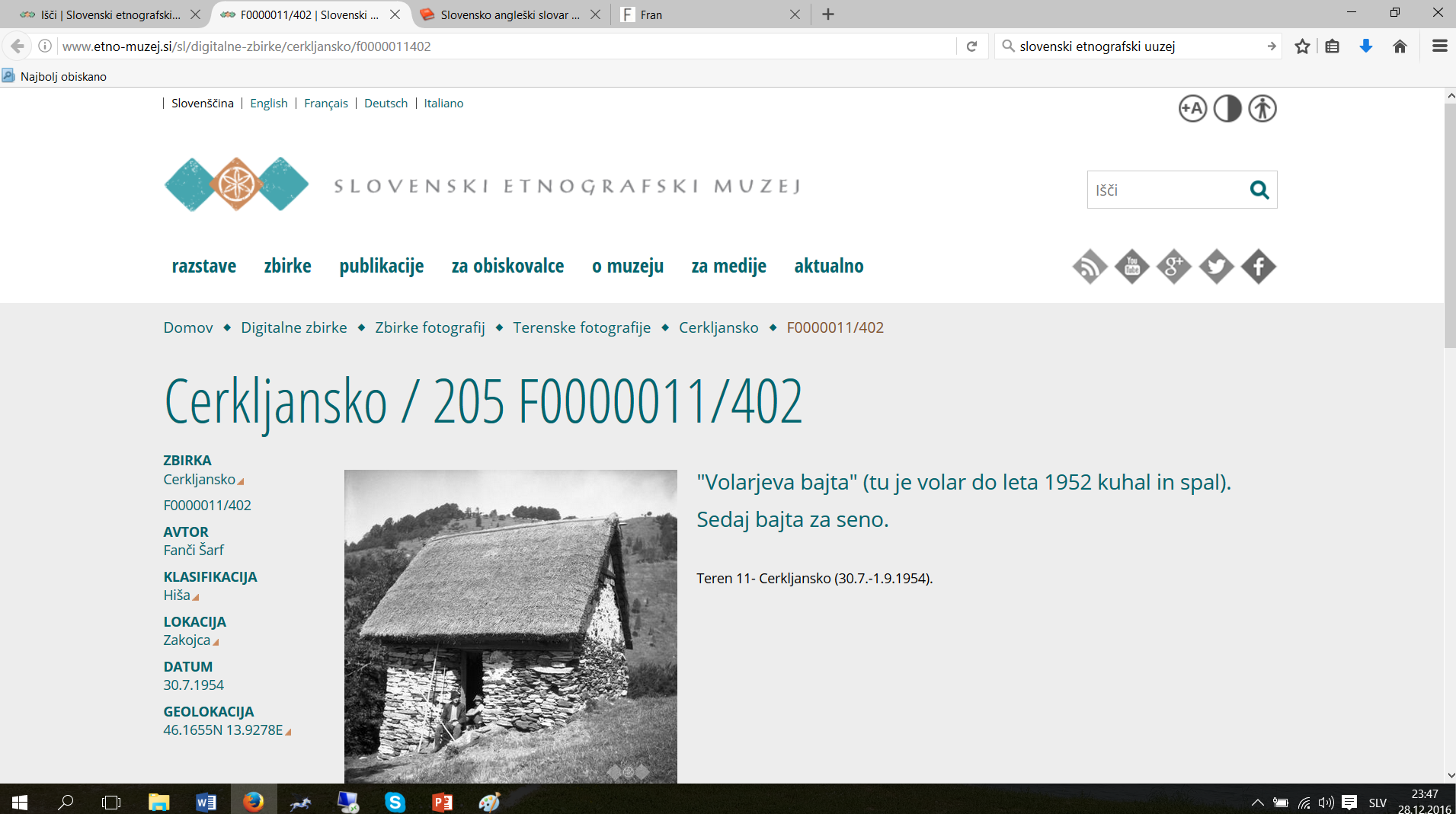 – some net-points have already got their online local dialect dictionaries (comp. http://www.narecna-bera.si for Carinthian Podjunsko/Jauntal and Mežiško/Mežica dialects, prepared by Anja Benko) and it seems reasonable to link them with e-SLA: 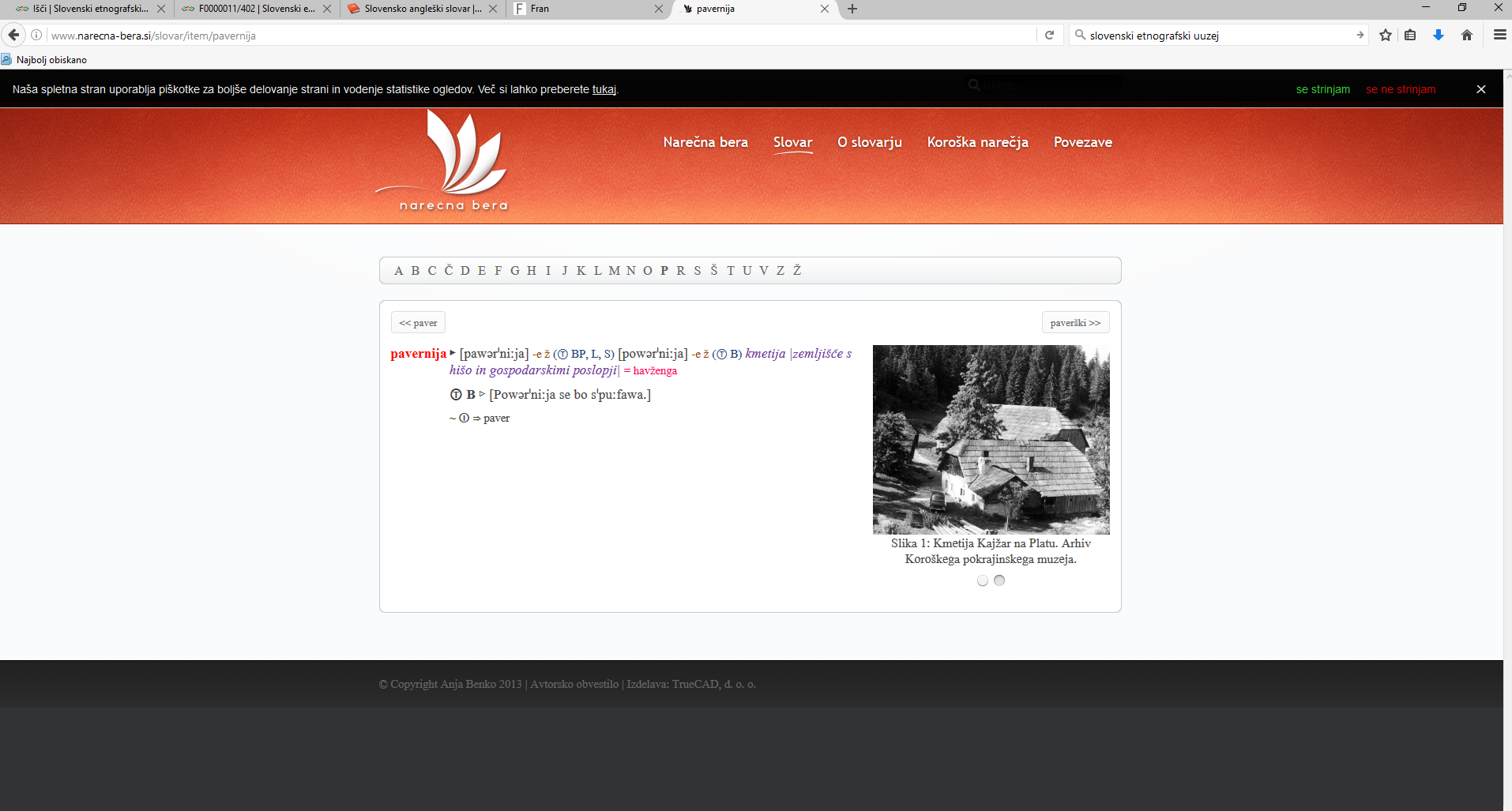 – only one SLA net-point has got its dialectal corpus so far, that is SLA T110 Kopriva (Kraško/Karst dialect), which has been prepared by Klara Šumenjak (http://jt.upr.si/GOKO/): 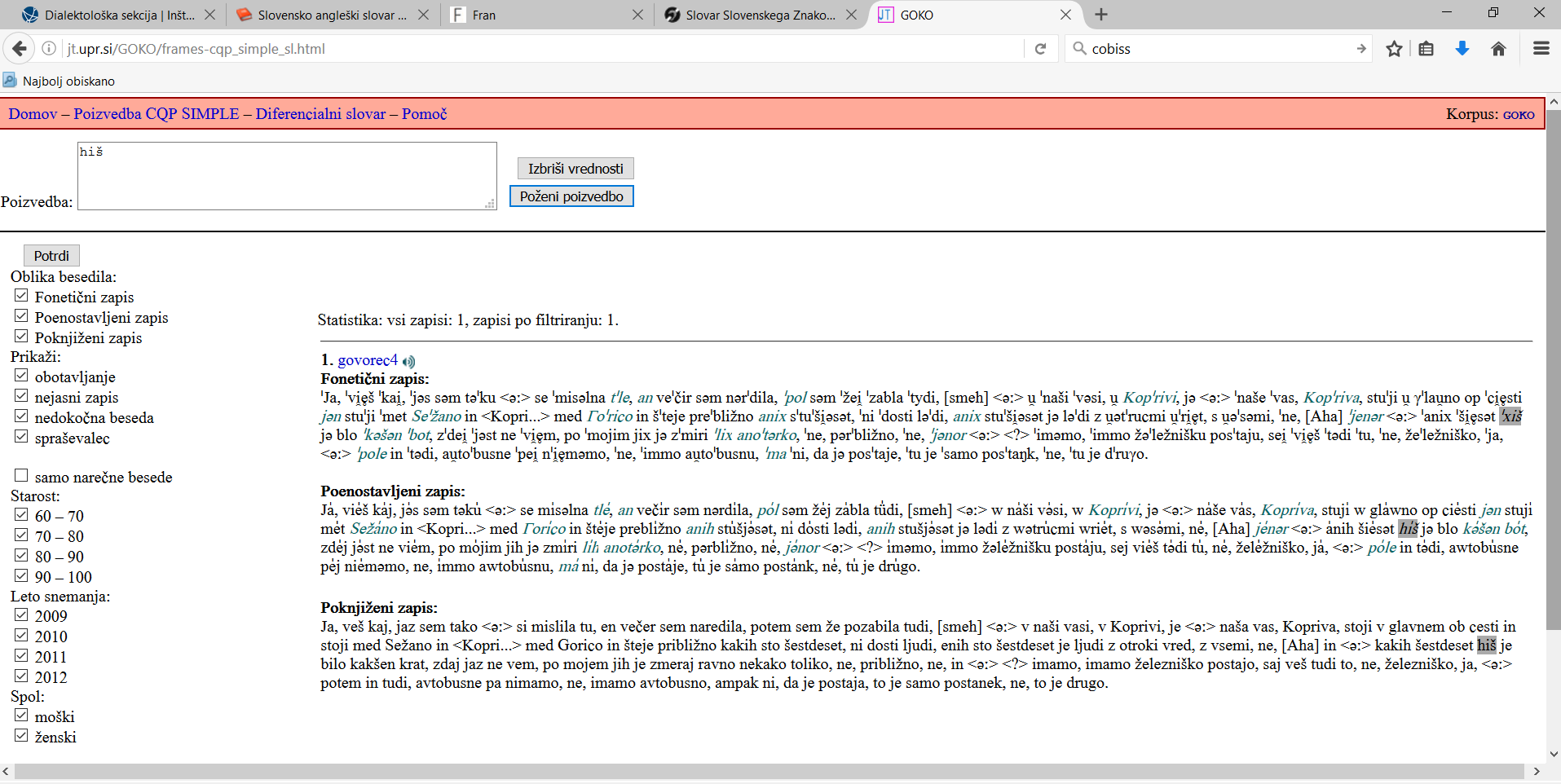 – having in mind different users of e-SLA, a link to Slovar slovenskega znakovnega jezika (Dictionary of Slovenian sign language – SSZJ) has been connected with every map (http://sszj.fri.uni-lj.si/): 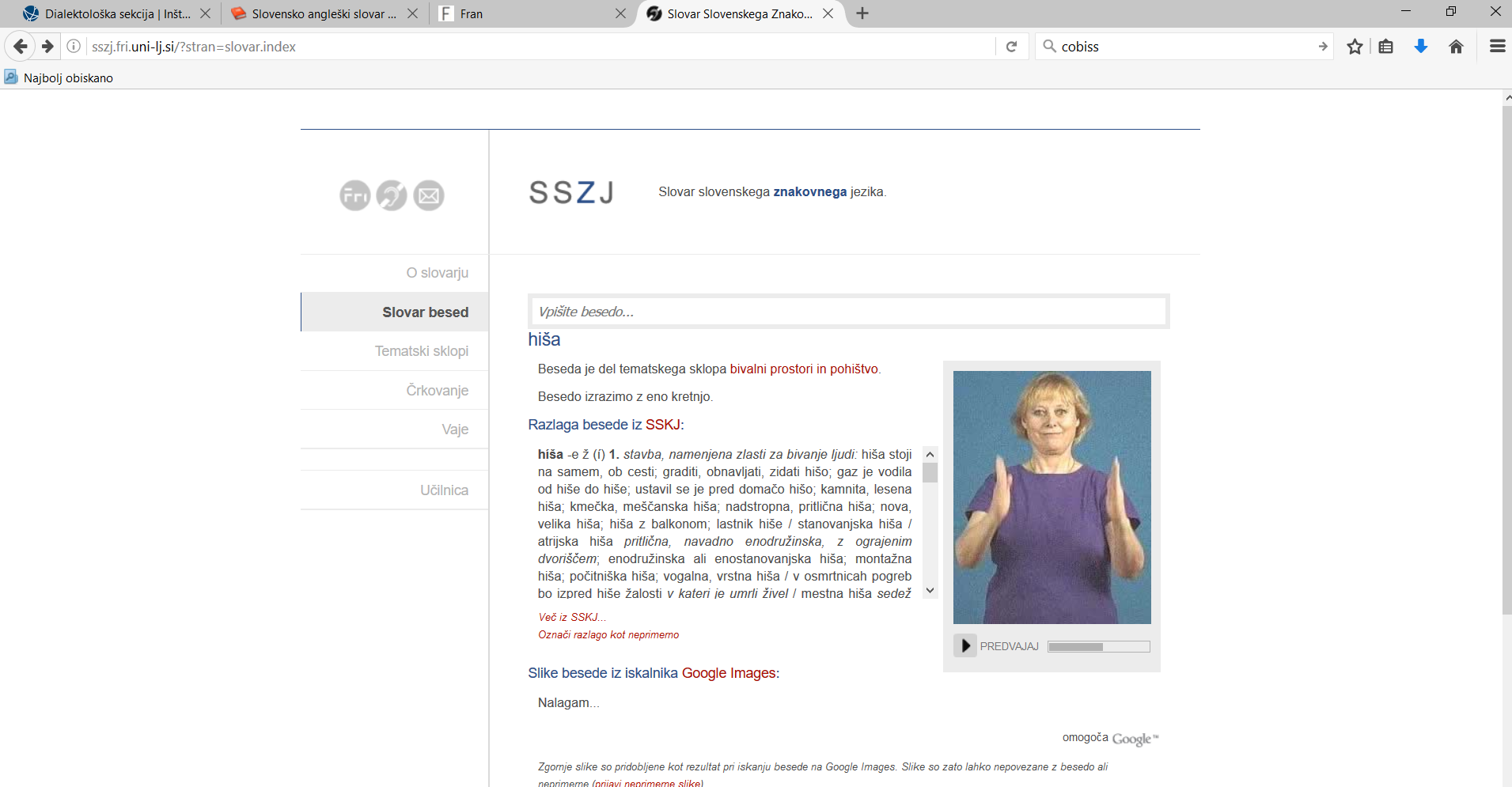 Application for recording new dialectal material by citizen – 1st side

By saving his/her answer one can reach the next stage of application, where he/she can add new files like pictures, photos, scans, video-recordings, Word documents etc. One can also record his/her own voice (pronunciation) of the transcribed lexeme and save it:

For checking and verifying citizens’ recordings it is necessary to get some data about the recorder (such as the age and education, time of recording and e-mail, when it’s possible) as well as informant’s age, gender and place of living. The application also shows the location of a certain village on Google map:

Before newly collected data being visible for e-SLA users, administrator has to check all the data and only then he/she can confirm them or not and get them visible to the public: 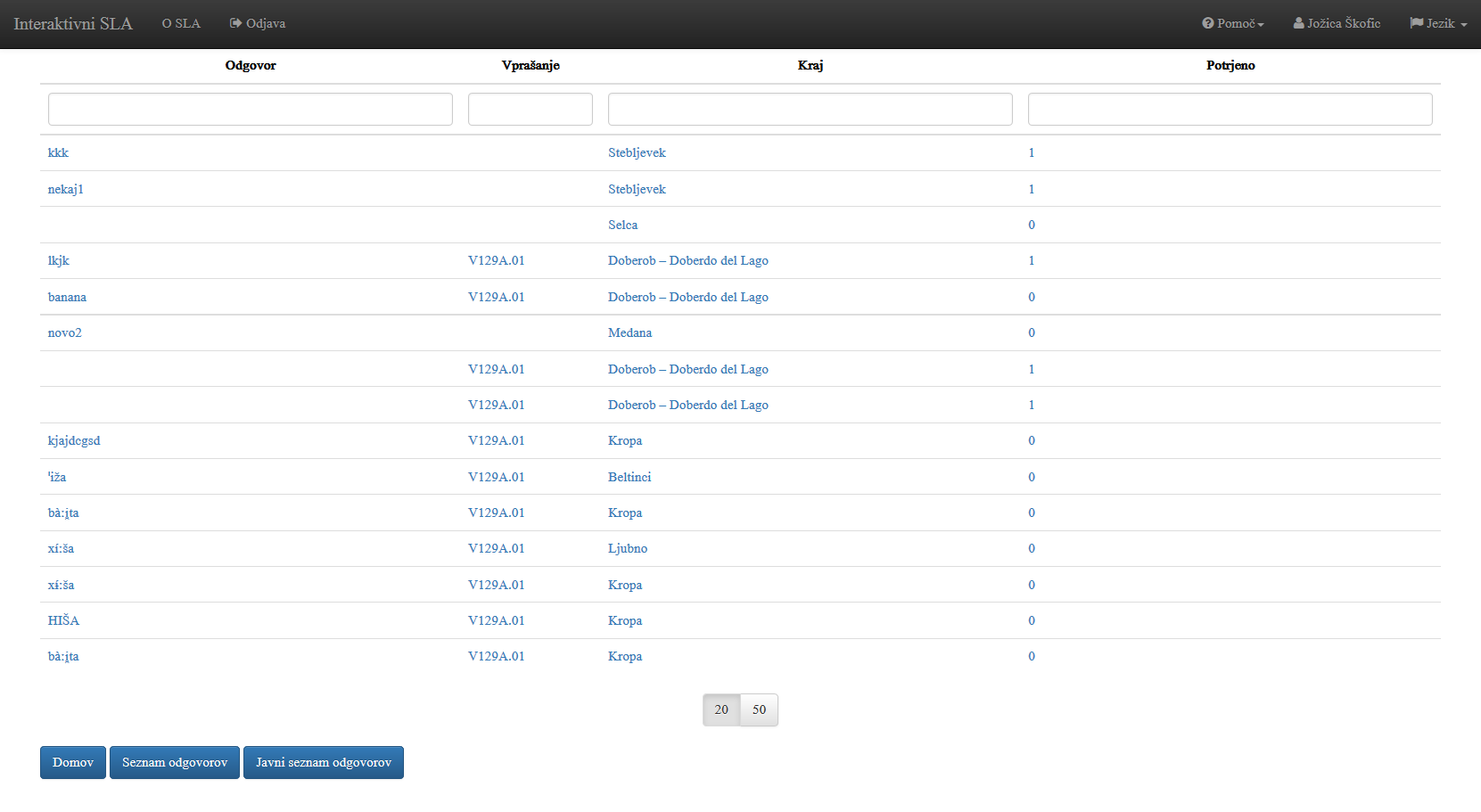 Slovenian Linguistic Atlas and scientific Slovenian dialectal dictionaries present a reach source of Alpine lexics, which can become an important part of the international project VerbaAlpina. Although much of recorded material in these publications is already reachable online, it is necessary to understand how the data are recorded, transcribed, edited etc. It seems to be impossible to transpose them into another medium without careful study, reorganizing and harmonising it with material from other languages. We believe only well organized team-work in an international project is the right way to prepare an excellent portal of the Alps, their nature, cultures and languages.